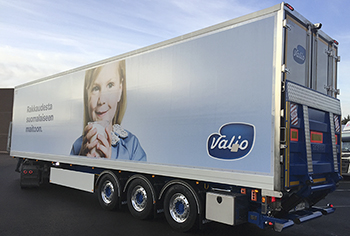 Good products and good service create long-term customer accounts. Kuljetus Keisala, from Alahärmä, is a customer at VAK already in the second generation: Father Heikki concluded his first purchase at Vahto in 1993, and in 2008 after a generational change, procurements at VAK have been carried out by son Pasi.

“My father’s opinion continues to have a strong impact, because he has such a long experience in the industry. However, the most decisive aspect is the overall entity: such products that we truly need, flexible service and a functioning maintenance service,” says Pasi Keisala.

Over the years, the Keisalas have also made procurements from competitors, but have always returned to VAK. The company’s most recent procurement is a semi-trailer that has been customised for the distribution of cold products. The previous similar trailer was also VAK’s equipment, and it has been in use for 12 years, during which time it has accumulated a mileage reading of 2.5 million kilometres.

“The new trailer is a well-implemented entity – I wouldn’t change anything about it. It has bogie lifts on axles 1 and 3, which is why it is so agile, and can reach anywhere that the tractor can reach. The partitioning wall solution, where both the cold and freezer compartments can be accessed from their own doors, is good, as are the refrigeration unit’s rear control units and cargo bars at three tiers,” says Pasi Keisala as he lists the features that have facilitated everyday work.

He also separately mentions the interior lighting, which has been implemented with LED lights. The difference with the old one is tremendous. As the cargo compartment is also equipped with speakers, it is nice to work there.

“Whatever the issue, they will manage to sort it out,” Pasi Keisala praises.

Keisala also gives a good grade to VAK’s Jarmo Laine, who he has traded with for more than 20 years.

“Similarily to other occassions, Jarmo suggested some new details, which have turned out to be functional. The experience and expertise of the salesperson end up being beneficial for the customer,” says the logistics entrepreneur.